Through the STEM to the stars​

Our 7th grade students with their teachers Dalibor Todorovic and Aleksandar Stojkovic visited the Laboratory of Astronomy and Astrophysics of the Department of Physics at the Faculty of Sciences and Mathematics. Professors Dragan Gajic and Milan Milosevic from this department held great presentation. The students were introduced to instruments for Space observation such is LKS200 Meade telescope, Lunt solar telescope and Vixen solar telescope. They also learned interesting facts about our galaxy and the galaxy of Andromeda. They were introduced to Skywatcher, and through the great photos they found out the magic of the Universe and realize that science and physics are all around us.
​In the second part they visited the laboratories of Physics and through interesting lectures and experiments held by professor Dragan Radivojevic students discovered the importance of physics. They were introduced to the exercises in Mechanics (acceleration of gravity, Harmonic pendulum, Physical and Mathematical pendulum, Determining resonance, Determining the speed of sound), Thermodynamics (Measurement of DHL-viscosity coefficient, Determination of surface tension of liquids, measurement of the specific heat of water by flow calorimeter), Optics, Electrical engineering (Ohm's law), measurement of radioactivity using Geiger-Miller's counter.

Faculty of Sciences and Mathematics 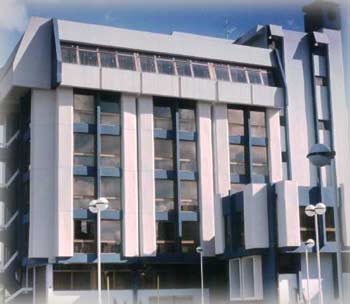